"To the stars through difficulty"

This past Saturday night, I drove with a group of 5 other volunteers to an immigrant detention center. The center is in a location off of an unassuming highway exit. At this exit there is a McDonalds, an I-Hop, and a T&A Travel Plaza. There is no public transportation that goes there. I didn’t see any law offices either.

We arrived at 6:30 in front of a one story building. I parked the car and we left all of our belongings inside. I was allowed to carry my keys and my notebook containing the list of people we planned to visit. We walked up to the uninviting building. A lone sunflower, planted in front of the building, hung her heavy head. Curls of razor wire adorned the top of the fence that extended from the edge of the building. We went inside and entered a waiting lobby full of families: babies, children, moms, brothers. All of them appeared to be waiting to visit family members.

All of the people were various shades of brown, including the guard. The guard’s box was located at the far side of the room next to the doorway to the visitation area. The trim parts of his box are what I’d call state-park brown and the top half was made of glass windows with a little ledge and a slot for passing papers and IDs. The walls were, well, white and prison gray. The waiting room chairs were black. Bright orange lockers lined another wall.

Though we had made an appointment, and confirmed the day before via e-mail, the guard in the brown and glass box had clearly received no information about our group ahead of time.  “Who are you with again??  he quizzed me, “who did you talk to??” He seemed no-nonsense but kind…just puzzled. There was a lot going on.  I leaned over to put my ear closer to the slot and tried again. He was hard to hear. I explained our purpose and passed him my notebook through the slot. He made a copy on a fax machine that looked to be from 1995.  It took a full minute to copy one page. He was making a phone call. As I stood there, I looked past him into the visiting area.

17 visiting stations were lined up in a row. They had been numbered with stencils overhead. One metal stool was affixed to the floor in front of each one. Each station had a black payphone style handset hung in a metal cradle above a Plexiglas window and small ledge. On the other side of the glass, a narrow hallway allowed the facility residents to enter and sit at a station. Every station was full of family members talking into the phones to their loved ones across the glass, also on a phone. Mothers were holding crying toddlers with one hand and phones in the other. I guessed a father was talking to a son. A woman seemed to be talking to her husband. More people were leaning against the wall behind them. It was noisy. There was absolutely no contact, and no privacy.

The guard seemed a bit frazzled. Whoever was supposed to be picking up the phone wasn’t. More people kept coming, wanting to check in. A former inmate with a bunch of tattoos of demons and Disney characters was insisting on visiting his buddy inside. Apparently, the immigrants are detained alongside the other criminals. The guard was trying to keep an eye on the visitors, figure out who was coming and going, deal with me, and check families in all at the same time. I told him we were not in a hurry. We would wait. He assured me he’d sort it out.

An hour and a half passed while we waited for the facility to decide that we were ok and arrange our visits. In the lobby, we made small talk with two kids sitting behind us, one adorably dorky looking little guy sporting black glasses and his older sister- they were there to visit their dad. They start school tomorrow. Their mother was on the phone trying to sort something out. The pastor in our group was engaged in an involved conversation with 3 others. We took note of the surroundings: a flat-screen TV scrolling messages littered with spelling errors, a machine that lets you add money to an inmate’s commissary account- for a hefty fee, info about a phone line that also lets you transfer money- for a fee that increases as the amount increases. We couldn’t figure that one out. Why does it cost more to send $300 than $30?

Shortly after 8:00 we met with our guys. Some spoke English, some spoke Spanish. Our group had two Spanish/English speakers (a teacher and a pastor), one English only, one English/French speaker, and me. I speak English and just enough French and Spanish to bumble through a basic interaction.

A guard shuttled in the first round of men and they took their seats. Most of the families had gone home by now so it was just us. I surveyed the guys seated on the other side of the stations. They were all dressed in blue uniforms. They all wore wristbands with their names, photos, and ID numbers on them. They looked as curious about us as we were about them. In our first set of guys, we had 3 Spanish speakers- one more than Spanish speaking volunteers. I decided to at least give it a shot and then switch with one of the more fluent ladies in a few minutes. I sat down across the glass from a gentle looking young man.

“Hola!” I started, brightly (I have hola down).

“Hola.” He said, followed by a bunch of Spanish I couldn’t understand at all.

“No English” he said, looking disappointed. I smiled anyway. I knew enough Spanish to at least introduce myself and ask his name, and how old he was. That sort of thing. Yay for that community college class I took… I learned that he is 23, 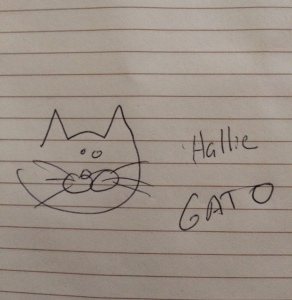 he is from El Salvador, he has 2 kids- one is 4 and one is a baby. He can’t afford a lawyer. He has no money. I told him I was from Washington, I didn’t have kids, I was divorced. I told him I had a cat. My Spanish is so terrible that I had to draw him a picture of a cat to convey this concept effectively. The picture made him laugh.

I put my hands together and expressed that I would pray for him with my church. He nodded vigorously and thanked me. We quickly exhausted my phrase-book Spanish. What else could I say in Spanish?? Oh yeah.

His beautiful brown eyes welled up with tears. His face was sad and he started a stream of Spanish that I pretty much understood. He missed his family, he missed his children, he was worried about them, no one came to visit him, he was all alone. He didn’t know what to do. He didn’t know what would happen. I put my hand on the glass and stayed with him a while watching the tears stream down his face. I was crying too, the isolation and sadness was too much for my heart to take.  This was not a hardened criminal, he was probably just like I was when I was 23, trying to figure out a better life in a tough world. And it had all gone terribly wrong. After a bit, I went to get the Spanish speaking pastor to switch with me and have a more fluent conversation with him. She did. I was glad.

I went to learn about and speak with the others. The other volunteers were doing a great job. They were all engaged in conversations with their guys. One was from Nigeria waiting for travel papers. He’s been waiting for 17 months. Our volunteer had just been there so they had lots to talk about! No one had visited him or written to him the entire time. One guy was from the Congo, one from Mexico City with a wife and two kids in the US.  I spoke to a 23 year old mechanic who wished he had some Spanish books to read- he’s been in there for 16 months- he asked me what the weather was like outside. “I’ve been two summers in here,” he lamented. We met one 18 year old. His parents had sent him to live with a relative in Virginia to escape the gangs in El Salvador and send money back home. All was going as planned, and then, as 18 year old boys will do, he met a girl, and got picked up on his way to visit her.  Now he is locked up.

All told, we spent about 30 minutes each with 8 men. They were all polite and grateful. They all thanked us for coming to visit them. As we were wrapping up our visit, I paused to pen a simple thank you note to the guard. “Thank you for letting us come and visit!” it said. I signed it with a heart and all of our first names. I passed it through the slot. He took it, read it, and stopped to look intently at me.

“Thank you for what you are doing,” he said. “I was an immigrant myself 18 years ago.” Then he just started to talk. He apologized for the long wait. He explained how he was trying to juggle many tasks. He wanted us to know how much he appreciated the time we took to care about these fellows. This was personal. He asked if he could keep my note.

He tapped his heart repeatedly. “I can’t say much, but I thank you all from here.”

We will be back.